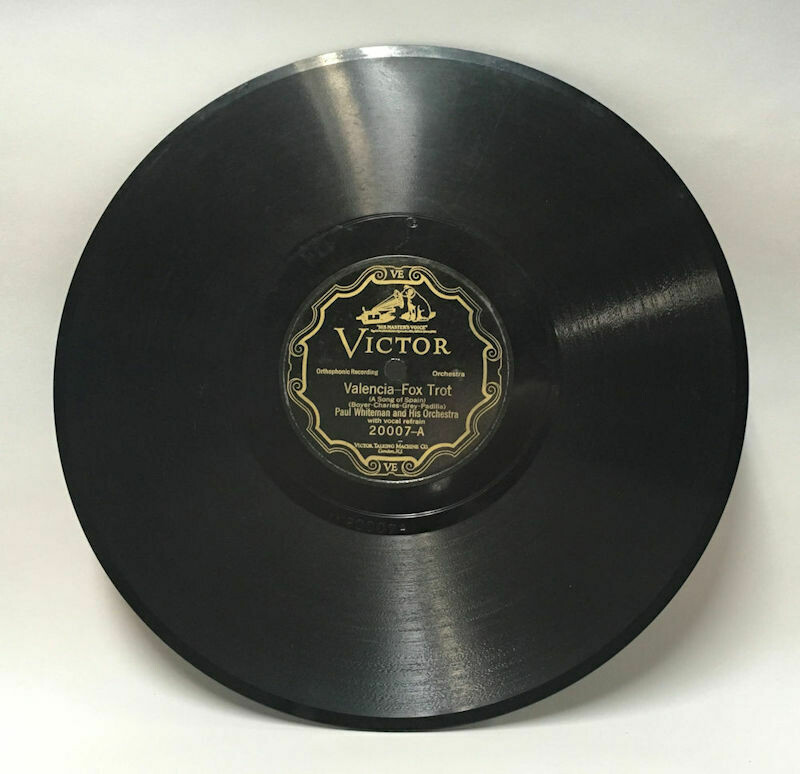 As the electric era kicked in Victor changed the labels once again to the "Scroll" label, which ran from 1926-1937. The earliest variety has the catalog number on the bottom. It would soon move to the right of the hole and the words "Orthophonic Recording" would remain left of the hole. These words would them get moved to above the trademark (1928-29).

Paul Samuel Whiteman was an American bandleader, composer, orchestral director and violinist. As the leader of one of the most popular dance bands in the United States during the 1920s and 1930s, Whiteman produced recordings that were immensely successful, and press notices often referred to him as the "King of Jazz". Using a large ensemble and exploring many styles of music, Whiteman is perhaps best known for his blending of symphonic music and jazz, as typified by his 1924 commissioning and debut of George Gershwin's jazz-influenced "Rhapsody in Blue". Later, Whiteman's work on symphonic jazz influenced many jazz musicians - directly or indirectly - such as Miles Davis, Gil Evans, the Modern Jazz Quartet, and Wynton Marsalis. Whiteman recorded many jazz and pop standards during his career, including "Wang Wang Blues", "Mississippi Mud", "Rhapsody in Blue", "Wonderful One", "Hot Lips", "Mississippi Suite", "Grand Canyon Suite", and "Trav'lin' Light". He also co-wrote the 1925 jazz classic "Flamin' Mamie". His popularity faded in the swing music era of the middle 1930s, and by the 1940s Whiteman was semi-retired from music. He experienced a revival and had a comeback in the 1950s with his own network television series on ABC, Paul Whiteman's Goodyear Revue, which ran for three seasons. He also hosted the 1954 ABC talent contest show On the Boardwalk with Paul Whiteman.